how to use a safety razor

If you’ve never used a safety razor before, be not alarmed! For gentleman who enjoy a wet shave, a safety razor really is a cut above — if you’ll excuse the pun. We’ve previously extolled the virtues of a safety razor in a recent blog post, but to recap: they’ll give you a close shave, reduce the risk of razor burn and ingrown hairs, and yield a remarkably low cost-per-shave.

Firstly, you must soften your beard hair. Consider using a hot wet towel to achieve this. Or, you can splash your face with hot water for a minute or two. Now, unscrew your razor (into three parts) and position your double edge razor blade over the three pins as shown below and allow to settle. Drop the middle plate on top and screw the handle back in, quite tightly. 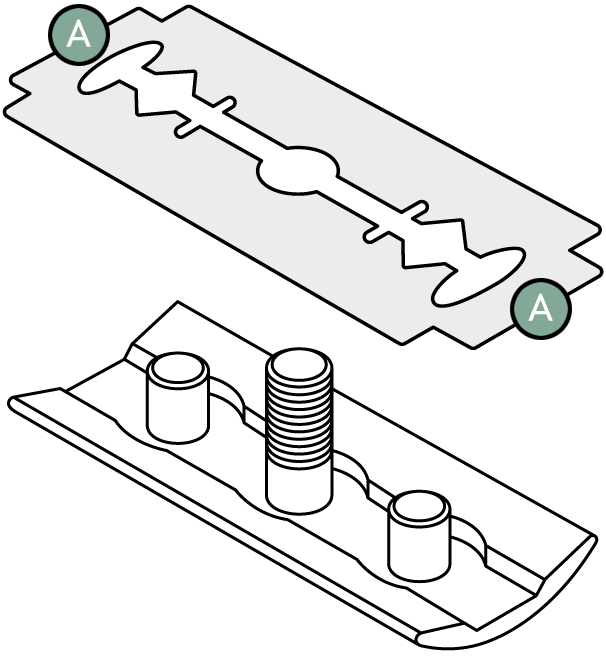 IMPORTANT: Only handle the blade on short edges as seen in 'A' above
Illustration No. 1

Important: Only handle blade on short edges as seen in 'A' above
Illustration No. 1

Step 2: Apply a luxury shaving cream or shaving soap to your face

Ideally, lather up with a shaving brush for a consistently dense and creamy lather. Go generous with the lather as you will be using it two or three times for your shave.

Step 3: Begin shaving in the direction of your beard grain - First "pass"

See below for the most common growth directions for beard hair and suggested shaving angle. 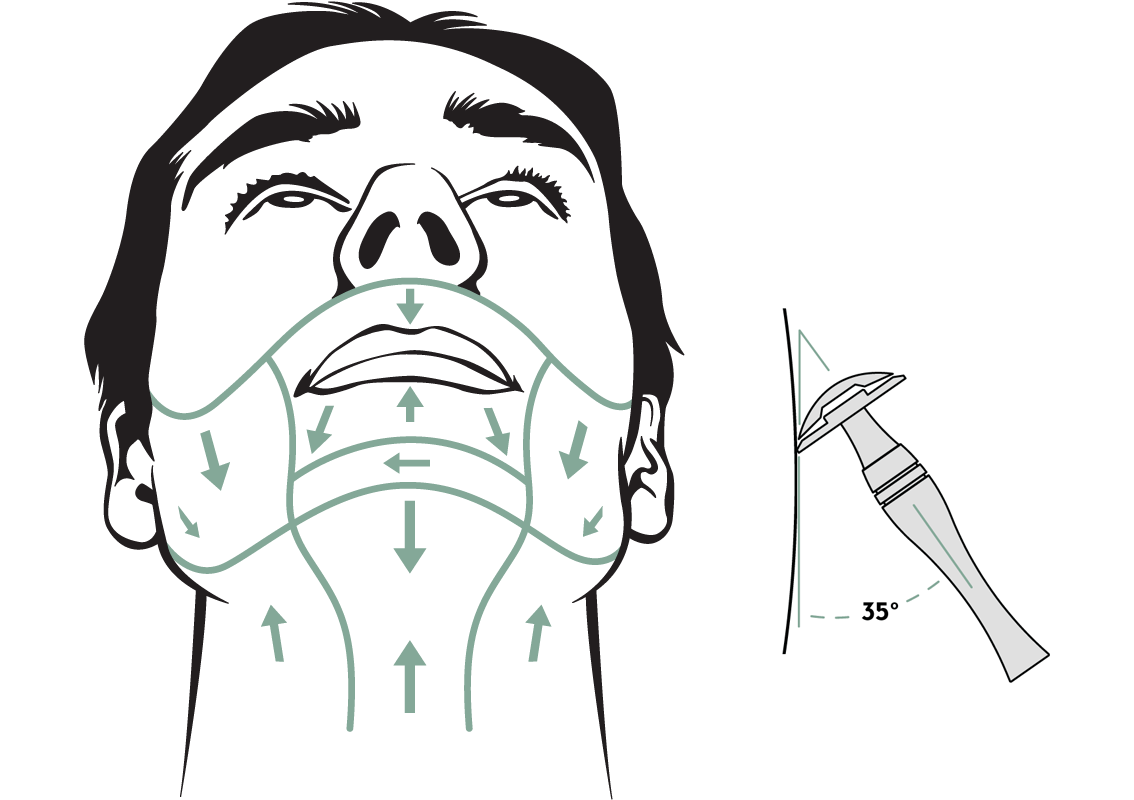 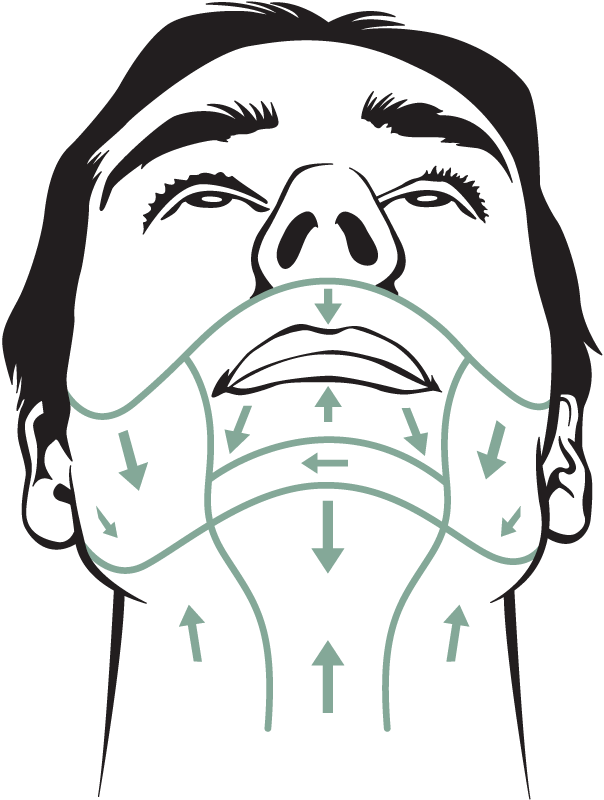 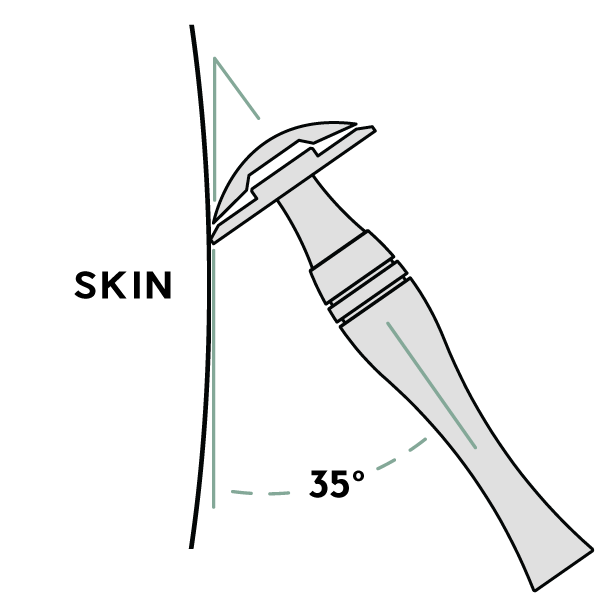 Bring the safety razor head to your starting point (we suggest cheek) and hold at a 30-40 degree angle away from your skin. Using short, straight strokes (assisted by the weight of the razor) the blade glides through your beard hair. Pull the skin taut where necessary to maintain the closeness of your shave. When you have completed two or three strokes, switch to the other side of the blade, repeat and rinse razor blade to release shave debris.

You have now completed the first “pass”. Do not worry if you have not removed all the hair as the second “pass” (and even an optional third “pass”) will rectify this.

Illustration No. 3 below shows the suggested shave direction for the second "pass". 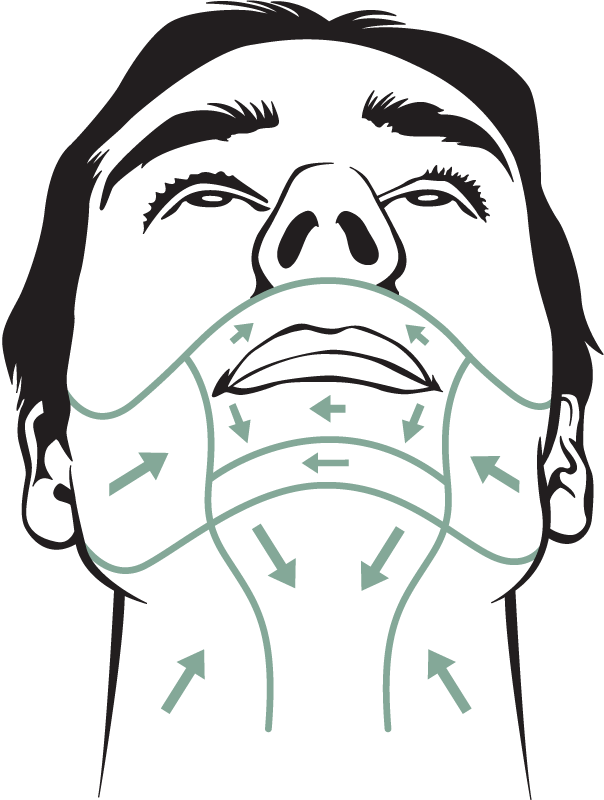 Apply further lather and similar to the first "pass", pull the skin taut where necessary and keep the razor at the 30-40 degree angle, however, this time you shave the second “pass” across the beard grain.

You will notice the closeness of your shave during the second “pass”. Be mindful to shave any areas omitted during the first "pass".

For many gentleman, two "passes" is satisfactory and your shave is complete.

However, if you have stubborn beard hair, or you seek an even closer shave, consider a third "pass". To negotiate the third "pass", simply shave against the beard grain (opposite direction to that highlighted in illustration 1 above).

NOTE: We recommend that only experienced safety razor users perform a third "pass".

Splash your face with cold water to remove remaining later and close pores. Dry your skin and apply your preferred aftershave balm to hydrate and moisturise. 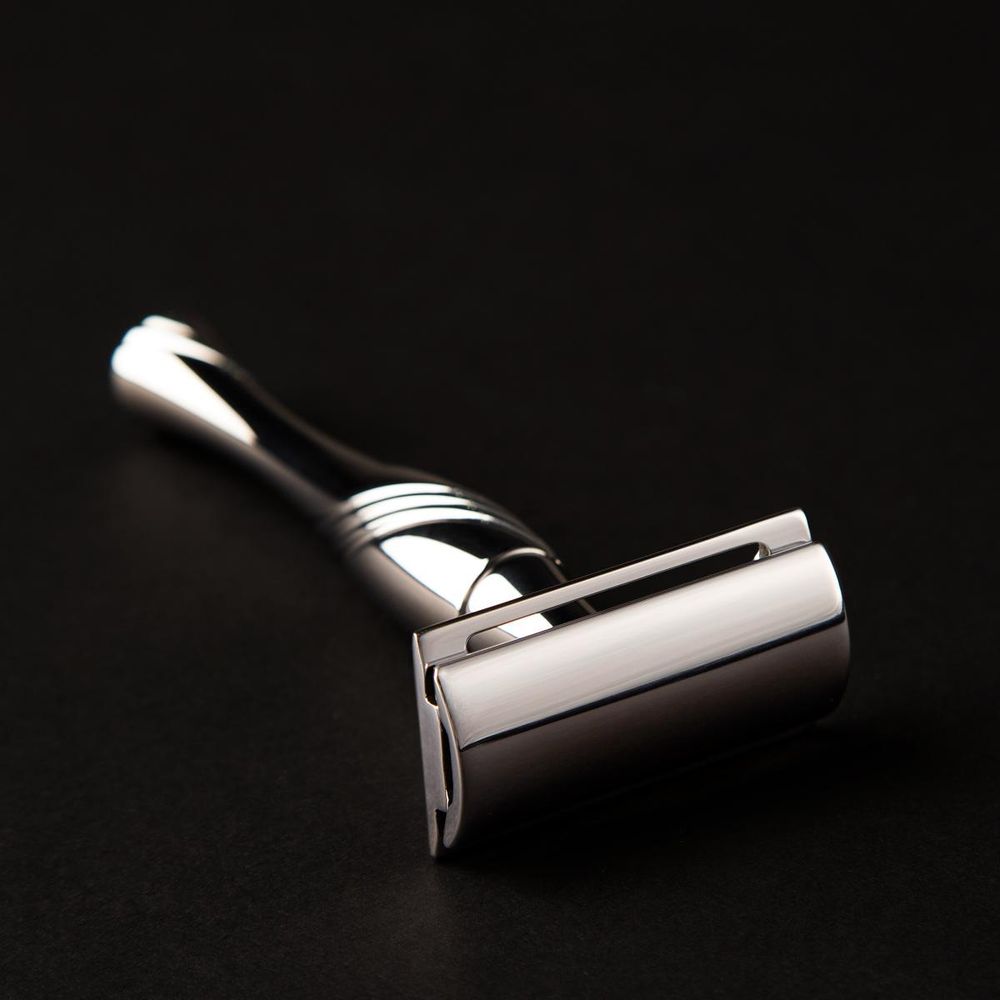 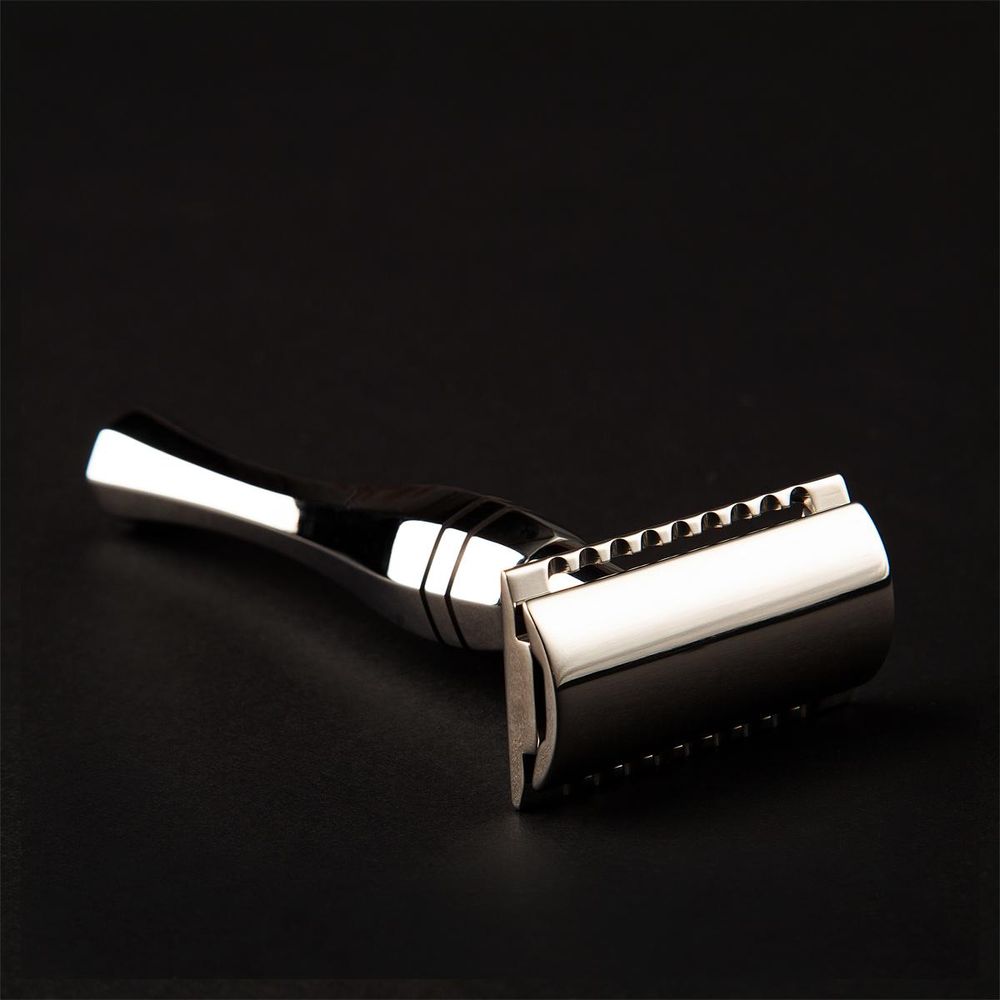 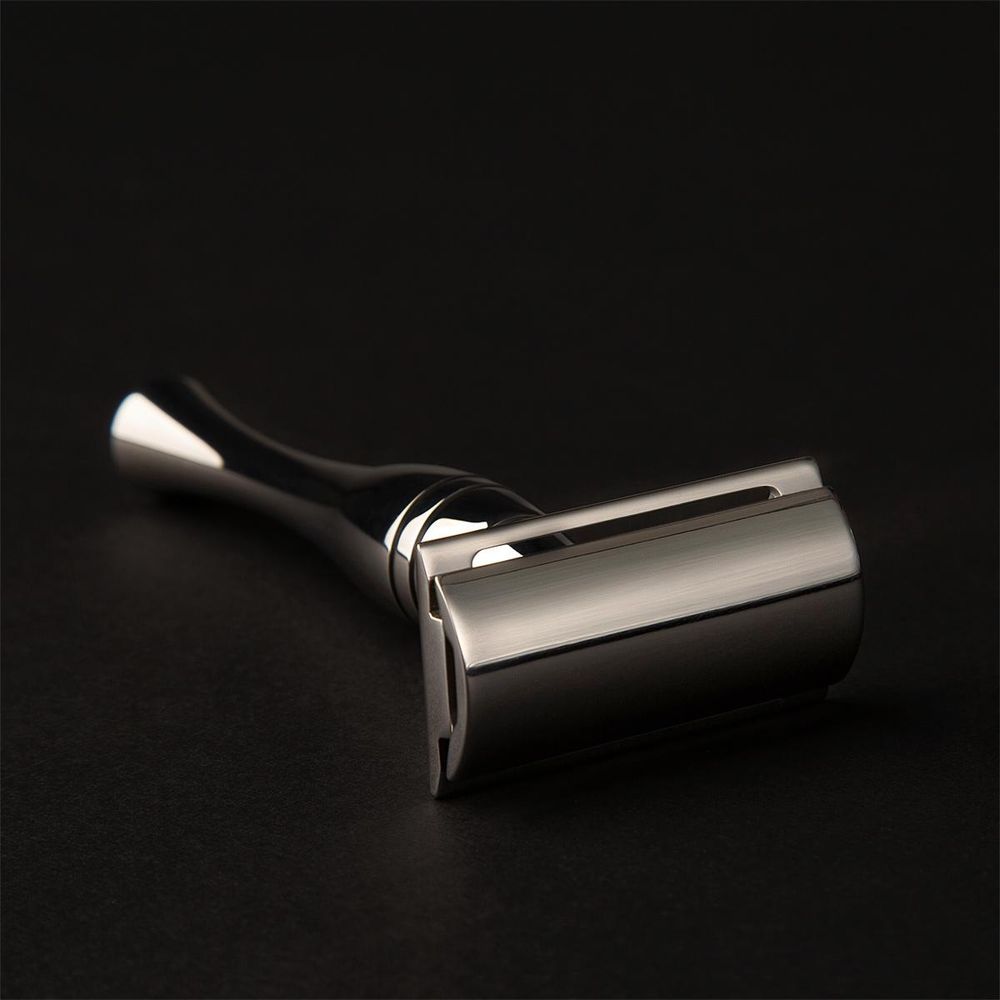